This article is a collection of all types of camera angles that are used in cinema, as an attempt to introduce the reader to camera angles. If you want to learn more about camera angles and cinematography, a great source is Gustavo Mercado’s book The filmmaker’s Eye: Learning (and breaking) the rules of cinematic composition (2010). A few examples from that book are used in this post.

There are six basic angles in films: the bird’s-eye, high, eye – level, low, worm’s-eye and canted (or Dutch) angle. Each of them has a specific purpose and is interpreted differently according to the elements of mise-en-scène. But most importantly, the different angles are used to evoke to the audience a specific range of feelings depending on the themes and characters of the story.

The bird’s-eye-view is considered to be the most confusing and disorienting angle since it requires the shooting of a scene from directly overhead. Because of the fact that people in real life seldom view events from this perspective, the subject which is photographed in such shots might seem unrecognisable and the whole shot can be characterised as abstract. This angle is often used for establishing shots at the beginning of a scene as it is really helpful to set the tone and mood of the location in which the story takes place. The bird’s-eye-view shot can be used for practical reasons and in favour of the story. An example of this is Alfred Hitchcock’s Psycho (1960). Additionally, the shots that are photographed in this angle can acquire a symbolic meaning and serve a purpose according to the mise-en-scène elements and story of the film.

In a high angle shot, the camera is placed above the eye-level of the character, and results in a framing that has the audience looking down on a subject. High angle shots are used to emphasize the subject’s powerlessness and weakness. Since the camera is placed from above, it minimizes the subject making it look small and helpless. High angle shots can also be used to predict the murder or injury of a character underlining his/her vulnerability and making him/her more sympathetic to the audience. The high angle shots can also convey feelings of entrapment, suffocation, suppression and panic. In addition, this angle can be used for practical purposes, for example when an incident is happening outdoors and a character is viewing it from his/her window or balcony.

In eye-level shots the camera is placed at a height that matches the subject’s eyes. This angle is used in routine expository scenes that lack drama and intensity. This angle does not evoke any particular feelings to the audience but it somehow makes the character equal to the viewer. Traditionally, filmmakers avoid shooting in extreme angles since they can confuse the audience. The directors photograph the characters in eye level shots which are very comfortable to the viewer since this is the way an actual observer might view a scene. Visually, this is the clearest way to view an object because it lacks any embellishments and exaggerations. Of course there have been exceptions to these rules throughout film history. 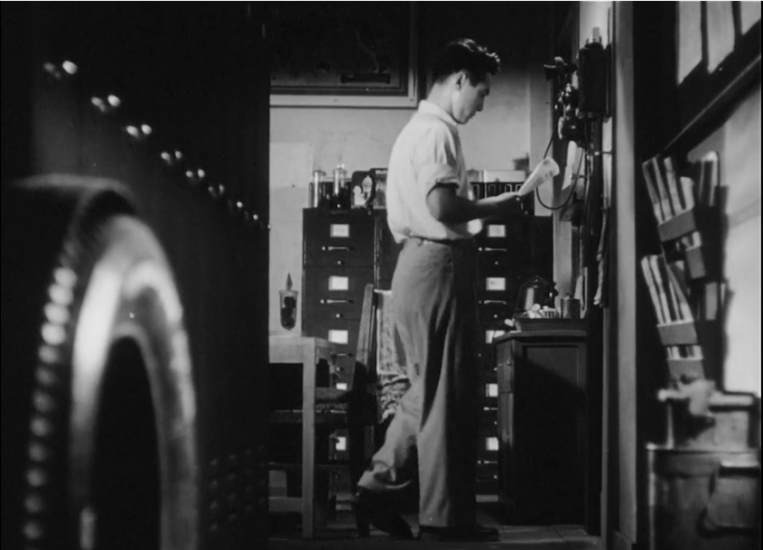 In a low-angle shot, the filmmaker places the camera below eye level and lets the audience look up at a subject. Low angle shots convey the subject’s power, confidence and control; because of the low angle, the size of the character is exaggerated and the subject looks bigger than normal. Due to the dominance of the subject’s figure in the frame, the subject inspires fear, respect and awe. Usually the villains of films are shot in low angle shots to underline their overwhelming supremacy.

In worm’s-eye-view shots, the camera is placed on ground level and allows the audience to view a scene from a very low perspective. From this point of view, the size of a subject is exaggerated and looks enormous to the audience, evoking feelings of power and control. This angle also allows the viewer to observe the environment in which the scene takes place. The worm’s-eye-view is not that common in films, and is mainly used as a subjective shot of a character that lies on the ground.

Canted shots are composed with a camera tilted laterally with the horizon in a non-straight line and vertical lines run diagonally across the frame. These compositions create spatial imbalance and disorientation. They convey confusion, insanity, psychological instability, drug induced psychosis and dramatic tension. Canted shots are mainly used to showcase a character’s abnormal state of mind, but they can also be used to represent the whole psychology of a group of people that are facing a stressful or unusual situation. Additionally, another use of the canted shot is to convey that an abnormal or unnatural situation is happening, without necessarily reflecting a character’s psychology. The bigger the degree to which the frame is canted (usually up to 45 degrees), the higher the abnormality and instability it reflects.